Welcome to my blog. Contents include NBA / basketball - related posts intermingled with random mundane thoughts dashed with a bit of sarcasm and (t)wit . Style of writing is under construction. ©2005 by the NBA Addict!.

But I feel the need to dust off some cobwebs off this blog.

And I don't want to do it via a meme.

Oh well. Back to Battle for Middle Earth. :) 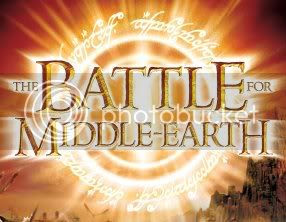 I think our zealous MIS Comptroller is too keen on my online activities.

It all started with their ban on Yahoo! Messenger and its website. Next to go was Friendster. But I had no reason to be paranoid then, since everybody in the office was doing it. Besides, I'm not a heavy Friendster user.

But then they banned Newgrounds. But that ban coincided with me sharing the site to my other officemates, so that had a question mark. They banned my online source of anything and everything mobile as well (i-Phone Forums).

But then... they blocked everything and anything blog. At first it was just blogger.com. But after that, anything with the word "blog" in the URL got blocked out by our Internet gateway/proxy server.

Which just means... even less time for blogging! Grr...

But that of course doesn't mean more productivity from me. They haven't banned my sports sites yet. :D And anyway, I'm not the type of person that can work 8 straight hours. I need breaks. Frequent breaks. And if I can't get that from blogs, well...

Sorry. Ramblings of an irate employee.

Delinquent Blogger I have been! I think I have a meme or two unanswered (sorry, abi!) that I'll get to in due time. But the worst thing about having little time left for blogging is that I get to read about you guys less and less :(

Things that are keeping me preoccupied:

Pentiium IV 3.0GHz on an 800MHz ASUS Motherboard, 80GB Hard disk, Radeon 9200 video card. Pretty standard setup, though I do admit the processor speed is wasted on the relatively slow video card. But hey, it's a HUGE upgrade from my K6 desktop and my Intel Celeron laptop. Courtesy of my papi. Haha what a leech.

Currently "trying the system" out with Need For Speed Underground 2 (sluggish on the default video settings), Kult: Heretic Kingdom (Diablo type game which keeps on corrupting my games... arrrgh), and Armies of Exigo (Having trouble at stage 3. Will need to GameFAQ a cheat sometime soon).

It's not the speediest, nor the smallest, nor the most high-tech of the cameras out there.. but I'm a sucker for freebies. It's a 4 Megapixel, 3x optical zoom camera that came with two 256MB SD cards and an MP3 player. Not bad for Php24,000 I think. :) Anyway, I split the bill with Happy. It's the first asset that we bought that we'll get to share :)

Getting an MBA sure eats up time. But it's fun to know that I still know how to cram :) I slept 2 hours last Tuesday because I had to run a simulation on Excel for a project for my Management Science Class. (For UP IE's out there, it's IE 141 + IE 142 + IE 181 crammed into 1 trimester) Of course, I was "trying out" the new computer at the same time, hehe...

Apparently, now I am a purchaser on top of being a marketing assistant, operations assistant, copyboy, draftsman, driver, courier, and messenger. Gods. I wish I was kidding.

Anyway, what makes being a purchaser fun is that I just realized how large a marketplace the world is already. A person called me the other day out of the blue asking for my email address. Unfortunately, I can't speak Chinese. I can't even understand Chinglish. Anyway, she proceeded to give me a quotation for MP3 players but I was looking for MP3 GREASE! Jeez. The Chinese should learn how to read English. Or hire someone who does. (Anyone out there wanna hire me? Hehe.)

Or maybe I should start taking Mandarin lessons. Ah well.

Not the one in Megamall mind you, but (what else?) one in the NBA!

LB going to New York has not been enough to get my lazy ass to blog. But this has.


MIAMI (AP) -- In the largest trade in NBA history, Antoine Walker was dealt from Boston to Miami on Tuesday night in a transaction involving five teams and 13 players.

Let's look at a team-by-team:

Holy fuck. Ostertag is worth that much? I should be GM! :D

The past 2 trades are more about personality conflicts between GM/coach and player, methinks.

New Orleans gives up the draft rights to Roberto Duenas in exchange for Kirk Snyder and Rasual Butler.

One unsigned unknown for two players. Why not. New Orleans needs the bodies.

They were gonna lose 'Toine to free agency anyway. And we can't expect Ainge to hold on to him if he's gonna go on a youth movement. I mean, if Walker teaches Al Jefferson to throw up unnecessary 3's this early in his career, it would be a colossal waste of talent.

Holy crapper! Dominant center, offensively potent PF, good defender and versatile forward, Dwayne Wade, and a (bit more) disciplined Williams. They still need a spark off the bench but it's looking good! Injury and chemistry remains the issue I suppose. In any case, they have 2 months to jell.

War of the Selves; The Usual NBA Chatter

Damn, it's been a while since my last post. And all I have to blame is this. I wish I could say it was work, or school. But fish? I've gotta get my head straight. Blogging should be a priority. :p

On the NBA - I don't know who the heck those people are that got drafted, but I'm quite positive all of them will be duds, in one way or the other. If the first pick of the draft, the supposed best player, is a white man, a product of the country who boast of other centers such as Chris Anstey and Luc Longley, well... One can't help but doubt, right?

More NBA - Are you feeling good about a Redd - LeBron tandem? I'm not sold on the idea. A better version of Rip Hamilton earning max money on a team desperate for depth. Well, better 5 years of Redd than 5 of Ray Allen I guess. I can't imagine paying a 35-year old Jesus Shuttlesworth almost $20M a year...

Watched War of the Worlds this weekend. It was exactly what I expected it to be. And since I'm a pessimist, that statement wasn't a thumbs up.

I turn you over to my two selves, Cynic and Critic.

Critic: It was a great movie. This wasn't supposed to be a gang-bang, action-slamming affair. Spielberg's total remake of The War of the Worlds came off as a mirror of the human psyche, how we react in the face of adversity. And sometimes, the image in the mirror leaves you cringing. In other words, it's not Armageddon, but it is more of Deep Impact.

Cynic: Yeah, yeah, been there ,seen that. Face it, people watched it because of Cruise and Spielberg, not because of all that psychobabble crap you just spewed out.

Cr: But they came and watched, didn't they? Maybe it'll serve as a message for all the viewers...

Cy: ...to convert to Scientology?

Cy: Uh-huh. Yeah, whatever. The thing is, the movie can be summarized so: Aliens attack, but forgot to innoculate themselves. Game over. As a movie, that plain sucks because its un-fucking-believable! Come on! A Tripod that can incinerate anything in its path and is impervious to missiles and it doesn't have heat sensors to detect hiding humans in basements?

Cy: And can you excuse a movie not even having ONE token babe? NOT ONE??? (Unless Ms. Fanning caught your eye, you perv) 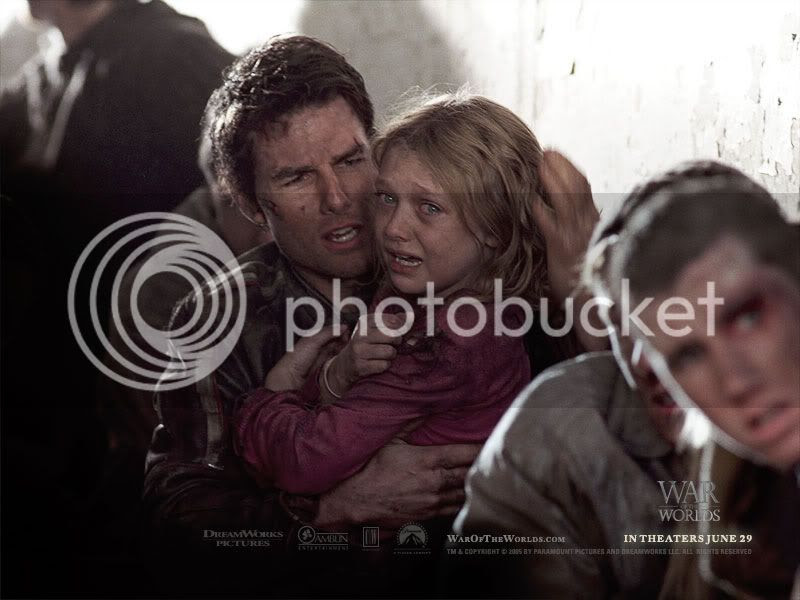 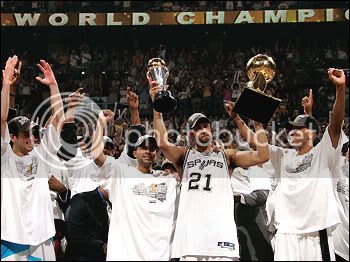 Congratulations to the 2005 World Champions, the San Antonio Spurs!